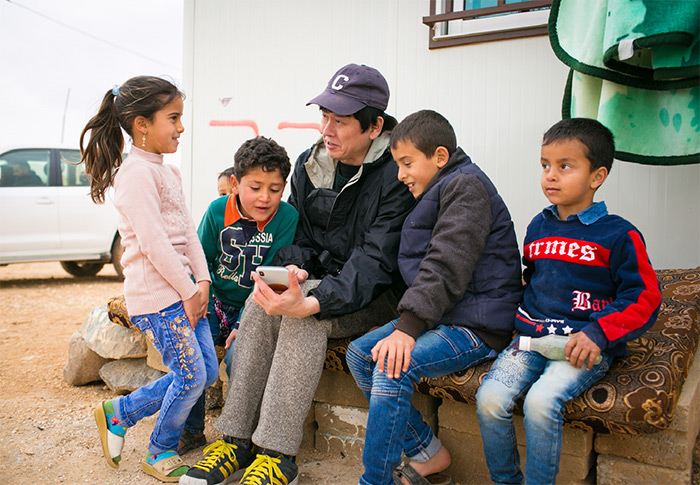 At the Zaatari camp, spending time with Abdullah's children
All photo credits belong to JPF

The number of people worldwide who are in need of aid is increasing due to what some say is the worst humanitarian crisis since World War II as well as frequent natural disasters brought about by climate change. As conventional methods and aid workers can no longer solve these issues alone, it is becoming more and more important for international NGOs to partner and cooperate with a diverse range of people.

For this project, JPF asked Nara, who supported JPF in assisting affected people by the Great East Japan Earthquake*1, to interact with and experience the life of refugees living in Jordan, where JPF has been delivering aid through its Response Program for the Iraq-Syria Humanitarian Crisis since 2011. 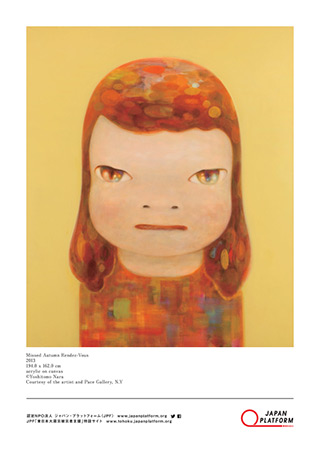 JPF×ART is a project that hopes to raise awareness of the refugee issue among various people in Japan who are often distanced from these issues, and lead them to see it as their own problem and think deeply about it. To achieve this, JPF sought the cooperation of Nara, who continues to inspire fans around the world through his artwork and messages related to social issues. This project also strives to contribute to the creation of artwork by the socially conscious artist.

In Jordan, Nara spent time with refugee families and children that live in two refugee camps (Zaatari, Azraq) and a host community in Jordan's capital, Amman. He has continued to share his experience in real-time through his Twitter account*2, not only during his visit but also after returning to Japan, and JPF encourages many people to take a look. A glimpse of his visit is introduced in this press release as well.

JPF will be introducing Nara's thoughts and experiences gained during the visit through its official website, social media including Facebook and Twitter, and various events, so please look forward to them.

*1: Nara supported JPF in assisting affected people by the Great East Japan Earthquake through donations as well as providing a public message and giving JPF permission to use his artwork.
*2: Due to JPF's safety guidelines, no public announcements could be made before or during the visit. For the aim of this project, JPF allowed Nara to tweet about his experiences in real-time under the condition of not specifying the time or location.

JPF was founded in 2000 as a new and uniquely Japanese framework for emergency humanitarian assistance. In order to deliver prompt and effective assistance within and outside of Japan, JPF coordinates the efforts of NGOs, the business community, and the government, all of which participate as equal partners, and provides various types of support to member NGOS in Japan. Since 2000, we have built out trust through over 1,400 projects in 47 nations and regions totaling over 54 billion yen in assistance as we promoted cooperation among corporate partners and NGOs and accurately reported our activities. We share information and create humanitarian assistance projects together with our 43 member NGOs with diverse strengths. After the Great East Japan Earthquake and Tsunami, over 7 billion yen had been provided from corporate and individual donors for disaster relief, and we partnered with locally-coordinating intermediary support organizations in providing assistance for local NGOs and contributed to the systemic development towards reconstruction.