Japan Platform (JPF) has continued its support for those affected by the Great East Japan Earthquake since the disaster struck in 2011. In January 2021, as we were about to face the 10th anniversary, we decided not to cease our assistance for the region and to begin a response specifically to support Fukushima with a new program policy to resolve the three remaining issues there.

This program aims to tackle the three remaining unresolved issues in Fukushima as recommended by external experts in the program evaluation for the Great East Japan Earthquake Response conducted during fiscal year 2019*1. Focusing on areas that still require support due to the effects of the Fukushima Daiichi Nuclear Power Plant accident, we will support Open Science*2 initiatives during 2021 so that people affected by the disaster and their supporters can share a common awareness of issues and promote reconstruction efforts through the power of citizens. JPF is committed to mobilizing the power of citizens so that people can live in good health and with a sense of hope in the long stretch of the post-disaster phase of their lives that they are living now.

3 REMAINING ISSUES IN FUKUSHIMA and Activities Toward Their Solution 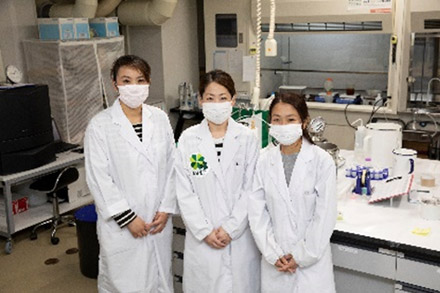 ▶Example of a Project Supported by The Fukushima Response Program:
Measurement of radioactive materials and health management of workers will be contracted to the Iwaki Citizens' Radiation Measurement Center (NPO Mothers' Radiation Lab Fukushima: MRLF); the organization is also commonly known as Tarachine. Tarachine has been previously supported by JPF's Living Together Fund between January 2017 and March 2020.

Initially, only specialists were involved in the difficult task of measuring radioactivity, but local mothers became involved in this endeavor and have remained involved with the sole wish to protect their children from radiation exposure. The measurement data produced by these mothers, using reliable technology, are released to the public in real time. Tarachine also aims to train measurement technicians by compiling the techniques they have acquired so far into teaching materials and offering online classes and training to those who wish to acquire them.

1 January 2021 to 31 December 2021 (*Monitoring will be conducted to confirm the progress of the project, and the results will be used for future actions.)

*2:"[Open Science] is a movement to transform scientific research into an activity that is more open to citizens (who are non-specialists). [...] It aims to expand traditional methods of scientific communication so that we can build up scientific and educational theories that allow for the realization of the types of scientific research that more people including the general public cooperate with it, are involved in it, and trust it." [Michinori Hatayama, Katsuya Yamori, Ana Maria Cruz, Muneta Yokomatsu, Masamitsu Onishi, Genta Nakano, and Emmanuel Garnier, "Present and Future Research in Disaster Reduction Systems (4)," Kyoto University Disaster Prevention Research Institute Annuals Vol. 63 A (2020):124.]

Fukushima has attracted the attention of the international community due to the fact that the natural disaster and the nuclear accident combined created internally displaced persons as well as radioactive contamination. Ten years later, the disaster is still ongoing and there are still many unknowns about radioactivity. In this response program, we will not shy away from the need to learn more in the complex and highly specialized fields of science and will aim to make use of the lessons learned by accumulating knowledge.

The long-term effects of the disaster have also had a profound impact on people's emotional and psychological wellbeing, and it is urgent that a framework is set up where the regions affected can fully recover. We appreciate your continued warm support for our efforts.

JPF was established in 2000 as a new mechanism for Japanese emergency humanitarian assistance provision where NGOs, the business community, and the government work together in equal partnership. JPF provides various forms of support to Japanese member NGOs to provide rapid and efficient emergency assistance abroad as well as within Japan. Over the years, JPF has built trust by providing assistance through more than 1,650 projects in more than 50 countries and regions of the world with a total amount of more than 67 billion yen as we promoted cooperation between businesses and NGOs and provided solid activity reports. Information is shared among more than 40 JPF member NGOs in various fields of expertise to create assistance projects together.

On 11 March 2011, JPF decided to mobilize within three hours of the disaster and established the JPF Sendai Office in Miyagi Prefecture. Full-time staff members in charge of respective regions were assigned to Iwate, Miyagi, and Fukushima prefectures to share information and collaborate with people affected by the disaster as well as local NPOs, relief organizations, and local governments in order to develop assistance activities. We launched the Living Together Fund to support local reconstruction efforts by expanding the scope of grants to include local NPOs in addition to our member NGOs. As of 21 January 2020, JPF has received more than 4,100 donations from businesses and organizations and more than 46,000 donations from individuals, all of which have amounted to more than 7 billion yen. These donations have enabled us to implement 84 JPF member NGO projects and 403 Living Together Fund projects. JPF has been supporting local NGOs together with the regional partnership organizations and intermediary support organizations in the disaster-affected prefectures, contributing to developing a framework for reconstruction.
In November 2015, JPF launched a policy of strengthening support for Fukushima. Support for Iwate and Miyagi ended at the end of fiscal year 2016. Through listening to the voices of the people affected and understanding the issues in their communities, we also made efforts to play a coordinating role in matching resources from various sectors with the right people in the right places, and this has seen a certain degree of success.